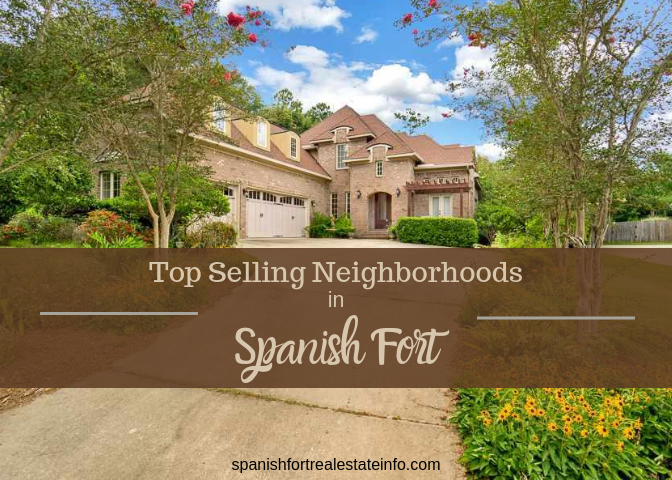 The Spanish Fort real estate market is continuing to boom with many homes selling during the month of August.  Each month you’ll be able to see the top selling neighborhoods in Spanish Fort with details that include:

In total, here is how the Spanish Fort real estate did in August for single family home sales…

In case you don’t realize it, Spanish Fort is not that big of town, so 41 homes sold in August is quite a number.  However, this town has been putting out these kinds of numbers for quite some time.

So let’s break it down into neighborhoods. Here are the……

Click on the neighborhood links below to find more information and homes that are currently for sale in those neighborhoods.

Highland Park is very popular and offers new construction homes in close proximity to Spanish Fort schools.  If you’re surprised the see the high number of days on the market, don’t be.  It’s because these are homes were newly constructed.  Homes sold on:

The most expensive home in Highland Park was $404,465 and the least expensive was 348,000.  The average square feet for these new homes was 3,266.  These properties are selling at an average of $118 per foot with a listing to selling price ratio of 99%.  As you can see, there’s not much room to negotiate on price with new construction.

As most of you know, this neighborhood occupies both Spanish Fort and Daphne, so they will be in both reports.  It’s no surprise that Timbercreek is in the top selling list.  This is a very desirable area that continues to draw buyers consistently.  For Timbercreek, homes sold on:

Stonebridge is remaining a favorite with 4 homes selling in August.  This a large neighborhood and it’s growing even more with new phases.  There are plenty of opportunities here for home buyers who want new construction at a reasonable price.  Homes sold on:

I love this neighborhood.  Spanish Fort Estates is an established subdivision with many different styles with a wide price range.  You are also in close proximity to major highways and the interstate.  3 homes sold on:

Stillwater is a lovely community tucked away off of Hwy 225.  You’ll find homes and lots that are a little larger than what’s typical.  Homes sold on:

Click here to see information for other Spanish Fort neighborhoods.

This content is not the product of the National Association of REALTORS®, and may not reflect NAR's viewpoint or position on these topics and NAR does not verify the accuracy of the content.

Find your next home

The Best Place to Find Your Home